As I check the news across the world this morning I have noticed that humans seem to be content lately with discontent and with what I would call “poking the bear“.

The police do not seem to want to stop poking the bear of injustice.

The judges do not seem to want to stop poking this same bear – who by the way, is over it.

The governments of the world have become antagonistic children and they are all bears being poked… and poking each other repeatedly.

Pharmaceutical companies want to start flexing their wings and poking the bear of illness and need.

And where is that characteristic laid back French attitude of freedom?

This man is poking a bear. For no reason except personal bias and when the bear gets up and eats all the people, the man will call for help from fellow bears… Bears that will not look at the man and say “you shouldn’t have poked the bear”…

The police here in America must not yet realize that we have Television. Based on their recent actions from circa 1952 and the fact that the bear is screaming for them to stop poking it, I believe they are doing this on purpose.. along with the judges.

Folks… the white guy, the hispanic guy, and the black guy are all the same guy with different accents and colors. They are cops, criminals, fathers, brothers.. We have seen this by now right? Only someone who has never visited a trailer park in the swamps of Florida would think that all races other than themselves were inferior.

I don’t see this with the police really.. I see poorly trained, scared young people who are facing things that only time can give you experience in. Those young people need to realize though, that fear will have you ending up on the news.

So here it is… French mayor, please stop deliberately trying to make your spot a place in the papers for more than burkini bans… your citizens will thank you. Police, please stop freaking out! Guns, loonies, and criminals are part of your job… remember?

Judges – Should never be elected officials anyway, but in the meantime, please step away from the cigars, brandy and deep leather armchairs of your clubs… have a go at the evening news before you make your next decision huh?

To bears being poked, please be patient … even when it’s hard. 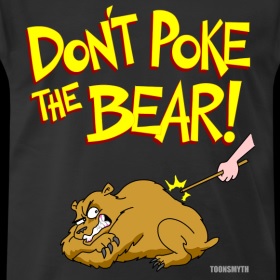